History of the Military Shadow Box 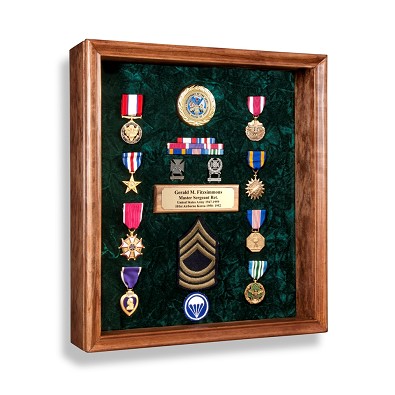 Although it has become a staple of military retirements, the history of the military shadow box is as cloaked in mystery as its name would suggest. The varying accounts of its origins make discerning the truth of the matter difficult. However, the story of the shadow box is one that sheds light on the respect and high regard that military service members have for one another.

There are two main branches of the story of the shadowbox, the military and the civilian story. While the civilian story focuses on the 19th century Victorian elite and a nifty device known as the Sterio-Optican (which was a kind of primitive 3D photography), the Military story delves into the superstitious nature of the military servicemember.

According to Naval legend, it was considered to be bad luck for a sailor’s shadow to touch land before his body did. His fellow sailors would therefore try to keep his “shadow” safely on the ship by putting it in the shadowbox, giving it to him once he was safely on land. This symbolic shadow would be a virtual backdrop of his military career complete with his rank, metals, and any souvenirs or accomplishments that would remind him of his time in the service. It also served as a reminder of the high regard that his fellow sailors held for him.

One of the most difficult transitions in any servicemember's life is the transition from the military to the civilian world. Whether or not they enjoyed their time in the military, it is an experience that has left them invariably changed. As the years passed, all military branches have began recognizing this transition by giving departing servicemembers their own shadowbox as a parting gift. Although its original purpose may be forgotten, its sentiment has endured the test of time.
Previous Post
Next Post
Email Us[email protected]
Call Us509-921-8090
Live ChatOnline: 9am - 4pm EST
Quick View